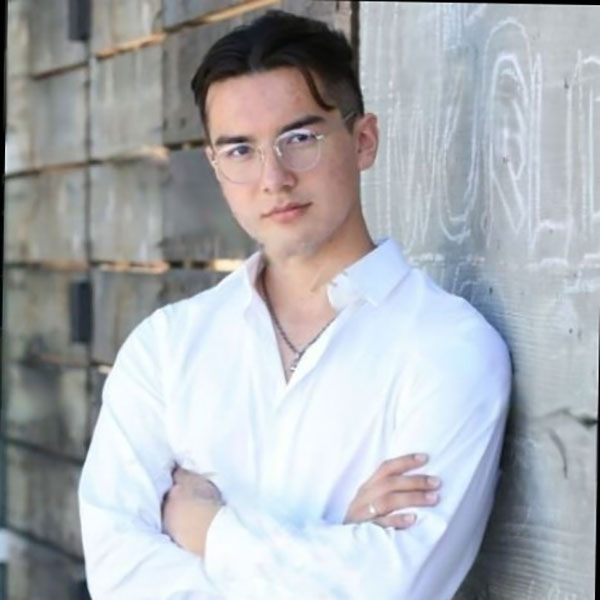 My interest in technology and devices all started with my personal device at Athena Academy. Without Athena Academy, I most likely would never have found my passion for VR. When I was 11, I got my first VR headset. It gave me this perspective to want to continue learning about it because in school I would have all these apps to use. In VR, it was the same but I could maneuver in all 6 degrees of freedom for what I wanted to express.

I am currently attending the Design Tech Highschool on the Oracle campus. In my sophomore and junior year, I started turning in my assignments through VR. I had the idea to create a Virtual Reality based curriculum in my school. I had to convince the school board, staff and teachers what VR is capable of and then presented the idea to the Admin team. They approved my proposal and provided funding for the program.

For two weeks, I taught a VR arts and design course. The first week, students were taught a multitude of different mediums to work with in VR. Then the next week, they created a design. I taught them 3D painting, spray painting, 3D modeling and sculpting, all within a VR medium. It was an amazing experience to see the students work. (Read more about it on Zooey’s LinkedIn post.)

I made a post to Reddit about the work I was doing in VR and the post went viral. I got to talk to a bunch of teachers from all over the world. One of them was an entrepreneur that wanted to do a podcast about VR in Education with me. Turns out he was the CEO and founder of Knox labs. In the end, I was offered a job to do sales. I’ve gotten to sit in on meetings with 20 or so entrepreneurs and give feedback. I’m flying down to LA next Thursday to get some training. It’s not your average 17-year old’s experience!

I applied to 16 different colleges, but ultimately made the decision to take a gap year and work full time at Knox labs. Within my initial two months at Knox Labs, I was appointed as the head of B2B outbound sales. Recently, I was appointed as the Chief Commercial Officer (CCO) in charge of much of the sales, partnered marketing and enterprise customer support. It’s been an incredible journey and I feel like Athena was one of those first stepping stones.

A Parent’s Perspective of Zooey’s Journey to Athena Academy

When Zooey was in 5th grade, our family life was in turmoil. Jim and I were spending every night with Zooey on his homework. I would help with language arts and history, and Jim would help with math and science. Despite Zooey’s best efforts, he was not able to keep up with the workload. His teachers were not sympathetic and thought he was just lazy or careless. Zooey was made to feel he was lazy and stupid. A friend later shared a booklet created by Montgomery County Public Schools in MD on twice exceptional kids that had sections on how to detect if your child is 2e, what to do to support your child, and what not to do. A number of the teachers were clearly in the “what not to do” camp.

We had Zooey assessed at the end of 5th grade (at that time, part of our district’s middle school program). The counselors both highly recommended Athena Academy as a good fit for Zooey. I asked about another school for students with learning differences which is much closer to our home, and they said he read too well for that school. Zooey is clearly very much a visual spatial learner. I did not understand the differences in learning styles until the information session at Athena. Zooey’s dad actually became quite emotional during that session because he related to most of what was being described.

I think Zooey regained his self confidence at Athena Academy. He had been very confident as a child — I still remember him going up to a Target clerk when he was 3 and asking, “Excuse me, where are you aliens?” He lost so much of that confidence during the last few years of public school. At Athena, Zooey embraced the fact he is a visual spatial learner. He created some fabulous clay cephalopods and other art while at Athena. Clearly, his attraction to and passion for Virtual Reality plays very well into his learning style.

Zooey’s Perspective of his time at Athena Academy

Before I knew I had dyslexia, the school I went to just said I was slow and a year behind. It was very challenging. I gradually figured out how my brain works. The whole intake information and then regurgitating it on a test never worked for me. It was always the projects that I really thrived in, but they didn’t have many of those in 5th grade, so I spent the whole year struggling and thinking that I would have to re-do a grade. It was a tough time.

When I went to Athena Academy, it was very different. They encouraged a lot of freedom. There were way more options. It was not just freedom with creating projects, but just being a student. I spent so much time in the makerspace! I remember playing with the PVC pipes and making fun projects.

I remember, specifically with art, I found my dedication there. I spent every year of my three years at Athena on the same art piece. I made these miniature stick figure men and I would plaster them everywhere. My art teacher encouraged me to work on the same project. Most teachers would say take a week or two and then move onto something else, but she encouraged me to expand more, branch off or add more guys here or there. At the end, my art piece was 18 feet long by 4 feet high. That encouragement correlated to me wanting to stay driven on one project for longer and it really helped increase my attention span for things that I enjoy.

At Athena, I used a chromebook and a touchscreen Microsoft display. Being a very visual person, it was so much easier to interact with my work with these devices. That was important for me to stay engaged because of my attention span issues. I made my first stop motion animation video at Athena Academy. That’s how I found my love of editing and videos. I spent a whole year on one project that turned into 15,000 photos. Athena was way different than any other school I have ever imagined or could have asked for – to actually have freedom and feel like I was learning something.

Also, the sense of inclusion in small classes was great. The amount of help and 1:1 time I got from the teachers was incredible. Individual attention to develop my passion, both personal time and 1:1 time to get help when I needed it. It has helped shape me into what I have become today.